Solar is driving a jobs boom in America and making our energy systems more affordable and sustainable. Now is no time to impose job-killing tariffs–but the we know that the industry will persist and continue to expand regardless.

Last Thursday, NASA reported that our planet had just experienced its four hottest years in human history. Clean energy’s massive growth and popularity over the last decade have demonstrated that Americans care about our environmental future. At Solstice, we’re proud of the work we’ve done to enable communities around the U.S. to take leadership in combating climate change.

Needless to say, this is no time to throw roadblocks in the way of sustainable solutions.

But today, the Trump Administration did just that, releasing its answer to a trade case that has been hanging over the American solar industry for nearly six months, and generating backlash from industries responsible for the majority of U.S. solar employment.

The Administration announced that it would impose a 30% tariff on solar panels imported in the first year, with declining tariffs over a four-year period. An initial 2.5 gigawatts of imported solar cells will be exempt from the tariff.

The chorus of opposition was broad, drawing in solar installers and climate activists, but also conservative think-tanks, and even ten domestic solar manufacturers. The Solar Energy Industries Association (SEIA), which represents domestic manufacturing and installation companies alike, pushed back against the tariffs, arguing that they will hurt the industry far more than they will help.

Bill Vietas, president of RBI Solar, a solar racking manufacturer in Cincinnati, believes that even the manufacturing sector could end up worse off under the new tariffs. “The U.S. solar manufacturing sector has been growing as our industry has surged over the past five years. Government tariffs will increase the cost of solar and depress demand, which will reduce the orders we’re getting and cost manufacturing workers their jobs.”

There are many more U.S. jobs related to solar installation than manufacturing.

Weakened Tariffs Cause for Relief

The solar trade case was triggered last year when Suniva, a foreign-owned panel manufacturer operating in the U.S., submitted a complaint to the International Trade Commission (ITC), claiming that they could not compete with the cheap manufacturing costs of countries like China and Taiwan. German panel manufacturer SolarWorld soon joined the suit, arguing on behalf of their U.S. manufacturing plant.

Both companies had been struggling to compete on an international stage, with Suniva filing for bankruptcy and SolarWorld announcing significant layoffs in the latter half of 2017.

The Commission issued its own verdict before year’s end, ruling that the companies had been harmed by low panel prices, but recommending penalties representing only a fraction of those demanded by the petitioners.

The penalties released by the Trump Administration today were weaker still, causing many to voice continued confidence in the industry. Said Abigail Ross Hopper, SEIA’s President and CEO, “Our industry will emerge from this. The case for solar energy is just too strong to be held down for long, but the severe near-term impacts of these tariffs are unfortunate and avoidable.” 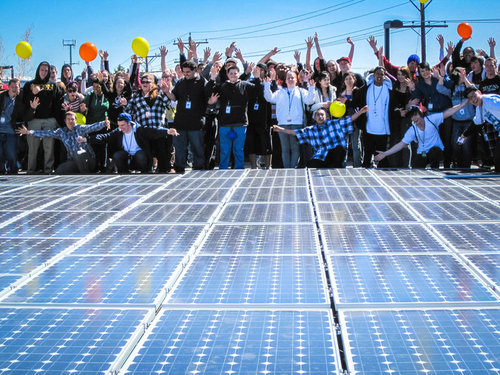 The Real Deal on Solar Subsidies

Drops in panel prices mean that installers are less threatened by the tariffs than they would have been even a few years ago: today, the cost of panels makes up only around 30 percent of utility scale system costs and 20 percent of rooftop ones. With the solar tariffs projected to increase panels costs by 10-12 cents per watt, solar companies will certainly face new challenges over the next few years, but the results will hardly be catastrophic.

Fortunately for Solstice, community solar is perhaps best positioned in the solar market to weather this storm and come out stronger on the other side. Community solar gardens offer effective economies of scale in comparison to smaller rooftop installations, and residential participants also see higher compensation rates for the energy they generate than solar farms that sell directly to utilities or commercial entities. It will be more important than ever for community solar developers to find ways of lowering customer acquisition costs (which has long been one of our main areas of focus), but in a market of tightened margins, these factors could give community solar the edge and allow it to reach its full potential sooner rather than later.

We’re more confident today than we were yesterday in the future of American solar energy. Don’t get us wrong—we don’t expect this new policy to boost domestic manufacturing. But we spend every day working with the 89 percent of Americans who want to put more solar in the ground, right here in America. In the years since Solstice was founded, we’ve gotten to know these folks—the entrepreneurs, the technicians, the installers, the policy wonks, and above all, our community partners and customers. To a person, they are smart, hard-working, and completely committed to making our future solar-powered. This industry has seen astonishing growth in recent years, even in the face of adversity, and we know that in spite of this setback, we’ll be right back at it before long.

Yesterday, there was a cloud of uncertainty hanging over us. Today, we know what we’re dealing with, and we’re getting back to work—to bring affordable solar energy to every American.

Here's How States Are Standing Up For Solar Energy

Learn about the policies that make sure you’re compensated for the energy your panels produce.

What is the Difference Between Net Metering and Feed-in Tariffs?
April 4, 2018
Go to Top