It’s time to address the elephant in the room: government subsidies for solar energy.

It’s a common belief that solar energy isn’t viable without them. Some even argue that the government shouldn’t incentivize solar at all. When compared to fossil fuels, they say, the numbers don’t add up, and funding solar projects is a waste of money.

But, as with many solar myths, there’s a lot more to the story.

It is important to discuss solar subsidies in the context of the existing energy landscape. The fossil fuel industry in the US has been the recipient of significant government subsidies since at least the early 1900s. It’s difficult to put an exact number on these subsidies due to complex policies and a lack of transparent data, but one 2015 estimate puts annual subsidies at $20 billion in the US alone. That estimate covers direct spending, tax breaks and unclosed loopholes, and subsidized access to land, resources, and infrastructure. 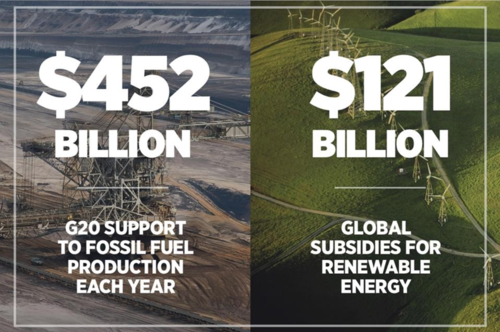 Beyond direct subsidies and tax breaks, there are associated costs of fossil fuels that are born by taxpayers. Burning coal releases toxins, radiation, and other forms of pollution into the air and causes adverse health effects which lead to millions of deaths per year. Natural gas, often touted as a low-pollution alternative, is often extracted through a process called fracking, which regularly contaminates nearby water supplies and can even increase the likelihood of earthquakes.

Those are just local concerns. All fossil fuels lead to changes to our climate, which in turn contribute to rising sea levels and significant losses to crop productivity, while simultaneously strengthening the destructive power of tropical storms (there is evidence that hurricanes Harvey, Irma and Maria were each worsened by climate change). These changes to our climate are incredibly expensive: one 2015 estimate from the EPA puts losses at $180 billion by the end of this century due to infrastructure repairs, the destruction of natural resources and loss of crops, and other causes. There will also be significant costs to human livelihood, as people lose their lifelong homes, land and even their loved ones.

A recent study from the IMF estimates that governments around the world spent a whopping 6.5% of global GDP–$5 trillion–in 2013 directly subsidizing fossil fuels or paying for the negative consequences that arise from their use.

The Top 8 Benefits of Putting More Solar in the Ground

At their peak in 2013, renewables received an estimated $13.2 billion in US government subsidies (only two-thirds the monetary subsidies received by fossil fuels). But subsidies are now declining. Several subsidy programs have since ended, and federal tax incentives will continue to decrease through 2022.

This isn’t just the story of renewables, though: We can trace similar subsidy patterns for the development of every modern energy technology. According to this 2011 study, US government support has historically spiked in the first 15 years of widespread market implementation, and tapered as prices begin to drop. To get off the ground, the US oil and gas industry required about five times as much help from the US government as renewable energy industry has used. Nuclear required twice that of fossil fuels: a whopping ten times what renewables currently receive.

The cost of solar has dropped 58 percent in 5 years, in part due to government support in developing the technology. But that support is becoming less and less necessary. In thirty countries, including Chile, Brazil and China, solar is now the cheapest available energy technology–even when you don’t consider subsidies. This trend will likely continue as more nations see solar energy outperforming coal and other fossil fuels, enabling subsidy-free renewable energy development in every corner of the world.

Solar, Sleet, and Hail, Oh My! Why Solar Still Works in Colder Climates 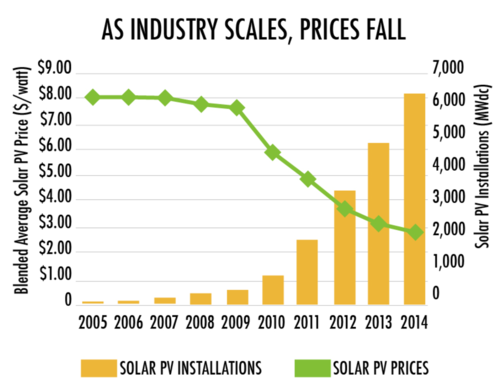 And the argument for switching to solar has never been stronger. Solar panels’ carbon offset far outweighs any emissions resulting from their production. 90-97 percent of a panel’s materials can be recycled and made into new panels. They’re a fuel-free power source, ensuring long-term energy independence for our country and local communities, and the storage technologies that will allow us to go 100 percent renewable are getting cheaper by the day.

In fact, many solar industry leaders are calling for an end to solar subsidies. By accounting for the true costs associated with each energy source, they argue, we can take an open and honest market-based approach to building our next energy systems. Carbon taxes are already being implemented around the world, and many state utilities are working to put systems in place which compensate energy producers for the true value that they add to the energy grid.

With the breakneck progress of renewable technologies, critics’ arguments are disappearing by the day: the world just got its first unsubsidized solar farm, financed entirely with private equity, in the UK. The project was able to achieve this by locating itself next to an existing solar farm, (which lowered its infrastructure costs), but it represents a major milestone in the solar industry’s quest for competitive renewable energy. As solar panel and energy storage costs continue to plummet, it’ll only be a matter of time until unsubsidized clean energy is the norm.

Learn More About the 10 Most Common Solar Myths

Our posts cover every side of these common misconceptions.