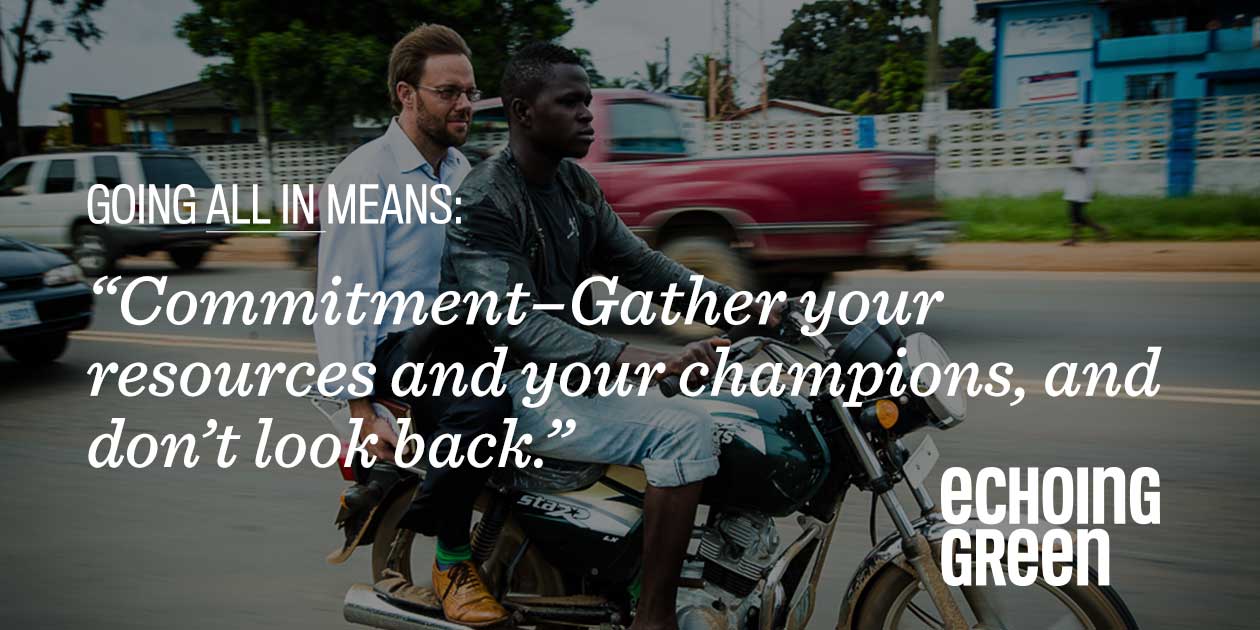 The Fellowship is a prize given to the most innovative, bold ideas for social change in the world. Echoing Green offers seed funding, mentoring, and leadership opportunities to the one percent of applicants that they select.

In response to receiving the fellowship, Speirs said, “It’s a true honor for Solstice to be recognized by a celebrated organization like Echoing Green. More Americans using solar power will help families save money and preserve the environment—and this fellowship allows us to do just that.”

Solstice is the first social enterprise dedicated to putting affordable solar power within reach of every American, particularly the 80 percent that cannot install solar panels on their roof. Under the Solstice model, households purchase a portion of a community-shared solar array, enabling them to access clean energy for the first time and save money on their utility bill—without an upfront cost. Solstice is based in Boston and currently undertaking projects in southern and central Massachusetts, with plans for expansion to multiple states.

52 organizations were chosen based on a rigorous selection process from a pool of 3,629 global candidates. As part of the program, Speirs and Moilanen will receive $90,000 in funding for two years, a health insurance stipend, leadership development courses, pro bono services, mentoring from leading business professionals and, most importantly, become part of a global network of social impact professionals.

“We’re inspired by the other dedicated leaders selected for the 2015 Echoing Green Fellowships and will support and champion them as they continue working to make the world a healthier, safer, and more equitable place to live,” said Moilanen.

Since 1987, Echoing Green has invested almost $40 million in seed-stage funding and strategic assistance to nearly 700 world-class leaders driving positive social change in more than sixty countries. Past Fellows have included the founders of Teach For America, City Year, Citizen Schools, One Acre Fund, and SKS Microfinance.

“Echoing Green Fellowships are designed to help these emerging leaders go further, faster, to change the world. We’re proud to be investing in tomorrow’s leaders,” said Echoing Green President Dr. Cheryl Dorsey. “Many of the Fellows chosen are leading projects in the earliest stages, when it is hardest to find the necessary resources to get off the ground.”

Solstice Initiative was founded in 2014 and was selected for the Princeton eLab Accelerator Program and Halcyon Incubator, which supports social enterprises with ambitious visions of social change. It won the Audience Choice Award at Princeton Entrepreneurs’ Network Startup Competition and has received accolades from the Verizon Powerful Answers award and MIT’s Climate CoLab prize.

Full descriptions of the 2015 Echoing Green Fellows can be accessed at http://echoinggreen.org/2015-fellows.

Solstice Initiative is a 501(c)(3) nonprofit and the first social enterprise dedicated to expanding affordable solar power to every American household, especially the 80 percent that cannot install a rooftop system. Under the Solstice model, households purchase a portion of a community-shared solar array, enabling them to access clean energy and save money on their utility bill. Solstice partners with socially-minded organizations to distribute community solar to their local constituents. Solstice designs, markets, and administers this solar offering on behalf of community organizations. To find out more information, visit solsticeinitiative.org.

Steve Moilanen, Co-Founder and CEO, has spent years working for the federal government, international organizations, and political campaigns in support of social change. He was previously employed by the White House Office Energy and Climate Change, which worked to reduce carbon emissions from the electricity industry, promulgate fuel efficiency standards, and manage the federal response to the BP Deepwater Horizon oil spill. In September 2014, Steve was selected as a Halcyon Fellow, which recognizes and supports outstanding young entrepreneurs with ambitious visions of social change. Steve’s experience also includes employment with the United Nations Environment Programme, the U.S. Department of Energy, and Obama for America. Steve graduated magna cum laude from Brown University and holds a Master in Public Affairs degree from Princeton’s Woodrow Wilson School. See his Echoing Green profile at http://www.echoinggreen.org/fellows/steve-moilanen.

Steph Speirs, Co-Founder and President, is a social entrepreneur and community builder with eight years of operational management experience in multiple countries. She was selected as a Global Fellow with Acumen, an impact investment fund that recognizes leaders in social enterprise. She previously worked as the Innovation Manager in sales and marketing at d.light India, a solar products company powering areas without reliable electricity; spearheaded Acumen’s renewable energy sector investment strategy in Pakistan; developed Middle East policy as the youngest-ever Director at the White House National Security Council; and managed field operations in seven states for the first Obama presidential campaign. She holds a B.A. from Yale and a Master in Public Affairs (MPA) with distinction from Princeton, and is a recipient of the Paul and Daisy Soros Fellowship for New Americans. See her Echoing Green profile at http://www.echoinggreen.org/fellows/stephanie-speirs.

Volunteer Opportunities: Solstice is recruiting volunteers to help with a range of projects including market research, graphic design, web design, programming, marketing, and outreach. Email your resume to contact@solsticeinitiative.org for more information.

Echoing Green’s mission is to unleash next generation talent to solve the world’s biggest problems. Echoing Green was one of the first organizations to invest in early-stage social entrepreneurs through our Fellowship program almost 30 years ago. Today, the organization remains focused on building a global community of emerging leaders in social change. To date, the organization has supported almost 700 organizations led by the most extraordinary purpose-driven leaders of our time. Echoing Green Fellows include the founders of Teach For America, City Year, One Acre Fund, The Global Fund for Children and SKS Microfinance. Echoing Green’s accelerator programming and investments help these leaders to go further, faster. Echoing Green also runs a suite of innovative programs that cultivate and support promising leaders, including programming dedicated to purpose development, board leader preparation, and impact investing. For more information, visit www.echoinggreen.org.