The reality is that clean energy won’t win the hearts of people unless companies prioritize one thing: trust. Transparency, honesty, and real dialogue are extremely powerful tools in the fight against climate change.

A perfect example of a company doing these things right is Grouphug Solar, a solar design startup based in Brooklyn that’s amassed an ever-growing community of avid sustainability enthusiasts curious to learn more about when, where, and how to go green.

With beautiful designs, a vibrant, active Instagram profile, regular Q&A’s, and a laid-back atmosphere that invites conversation, Grouphug Solar is changing the way people think about clean energy. It doesn’t hurt that they sell gorgeous products, either.

We caught up with Grouphug founder and CEO, Krystal Persaud, to learn more. Here’s how Grouphug is reshaping solar.

We’re big fans of solar here at Solstice, but let’s be honest: solar energy isn’t always beautiful. There’s a reason Tesla is designing a solar roof as an alternative to traditional panels, engineers are creating transparent solar windows, and solar developers often place hedges and trees around solar farms so they blend better into nature. Aesthetics.

Grouphug has aesthetics down pat:

The World’s 10 Most Beautiful Solar Farms

On top of being a sustainable source of energy for your devices, Grouphug’s window solar charger is fun to look at, making it a bright spot both symbolically and literally in your home. And, unlike traditional solar panels, it doesn’t need a rooftop, parking lot, or open field to operate. Instead, it fits right into the average household or apartment window.

“When I started researching solar panels, I realized that the fundamental design of a solar panel hasn’t changed in over sixty years. It’s basically a rectangle slapped on a roof, a pole, a backpack, you name it,” Krystal notes. Of course, people have created plenty of innovative uses for these rectangles, but generally with a mind for function but not form.

“There are definitely personal solar devices on the market,” Krystal continues, “but they’re designed for people who like camping, fishing, hiking, boating…and I hate all of those things.”

This makes Krystal unique, perhaps, among early solar enthusiasts and environmental advocates (who have acquired a reputation for being outdoorsy). It also motivates Grouphug’s one-of-a-kind design-oriented approach to solar that’s changing the way people think about electricity.

And if you think the window solar charger is cute, wait until you see Grouphug’s solar options for businesses: 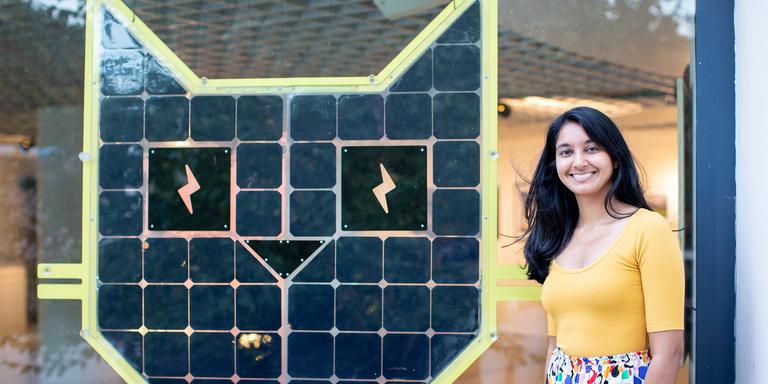 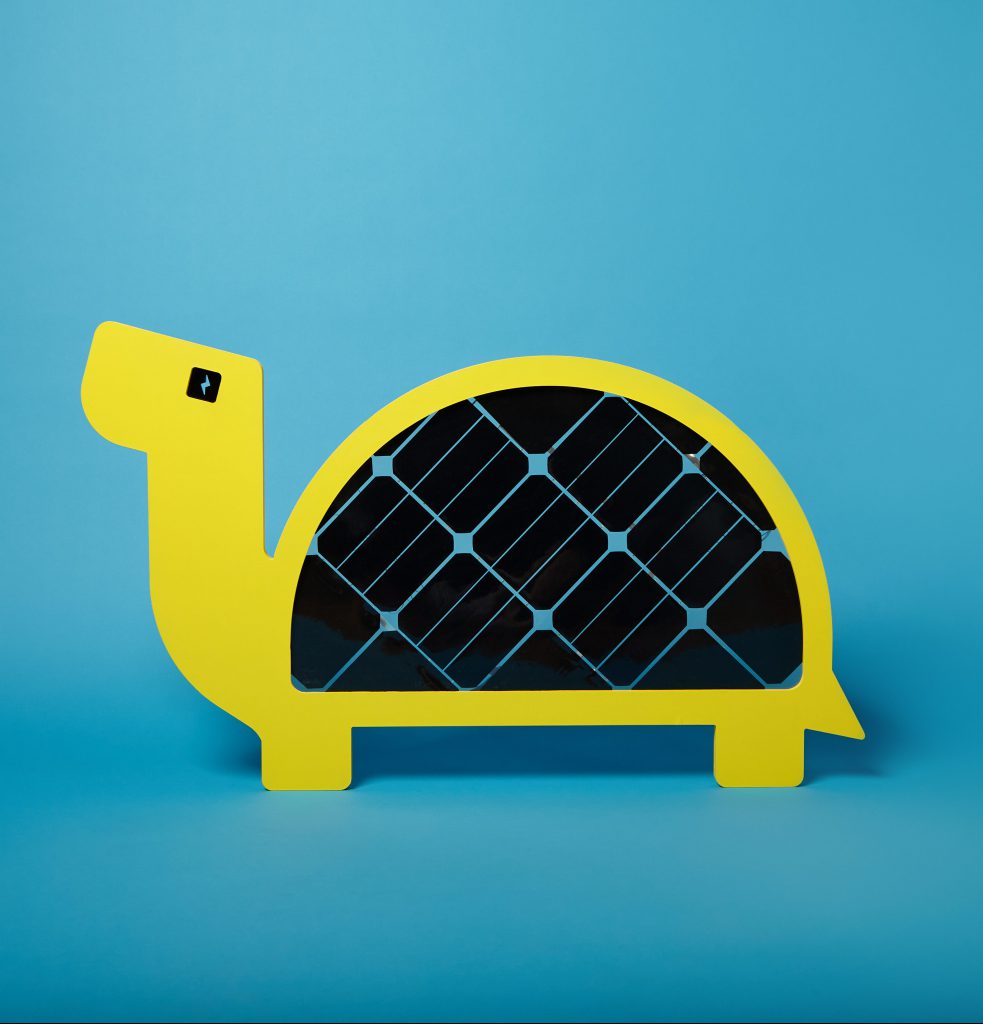 Yep, that’s a solar cat and a solar turtle. I bet you didn’t think you’d see either of those today. We’ve written about how solar and animals make a good combo before, but we didn’t mean like this.

These solar shapes allow companies to express their support for renewable energy with a little added personality. For example, Grouphug recently provided a solar cat to a restaurant. This restaurant prides itself on being sustainable, and also frequently has customers ask to charge their phones behind the counter. Their new window-fastened solar charger gives customers a convenient solution while showcasing the restaurant’s green values in an entertaining way.

All this goes to show: energy doesn’t need to be bland. It can be beautiful and engaging. And these qualities can go a long way in spreading solar farther and wider.

Taking The First Step Into Solar

Solar is easy to get behind: it’s clean, it’s renewable, it creates jobs, and, in the last few years, it’s become cheaper to produce than coal and even more cost-effective than existing natural gas plants.

But becoming a solar customer is often pretty difficult. From determining whether your home qualifies for a solar installation, to navigating a broad sea of confusing information on the costs and available suppliers in your area, to setting aside a hefty sum of money to make the switch, going solar isn’t something you can normally decide to do over lunch.

Grouphug is looking to change that. They know that if we want everyone to hop aboard the clean energy train, we have to make it easy to do so.

“It all started when I decided I wanted to change my electricity source to make a difference on climate,” Krystal told us. “I realized I didn’t know what to do. I figured I’d be able to figure out the process to get solar panels, but even as a tech-savvy person who’s motivated to live sustainably, I couldn’t decipher most of what I was reading online.”

So what did Krystal do? Answer: “I just bought stuff and started making my own solar panels at home.”

It’s not exactly what most of us who aren’t industrial designers might do…but Krystal did it so we don’t have to.

Now, Grouphug’s window solar charger is providing a simple first step into solar. It gives folks something interactive and hands-on that they can start to understand the workings of.

“I think if you close your eyes and think about solar you think about a big thing on a rooftop, and that doesn’t feel like a thing that you can just do,” says Krystal. “For us, the goal is warming people up, getting them educated and interested, and letting them see solar in a different way than they would normally. We’re removing a layer of mystery. Just getting someone to take a step in a new direction can really open up or even change their mind.”

Grouphug is expanding its role in the solar industry as an educator and springboard for individuals interested in clean energy technology. They’ve begun to include a booklet full of educational information about solar with every solar charger purchase–all with the goal of demystifying clean energy for the average buyer.

“Part of our superpower is that people come to us with questions because we’re approachable, and we explain things in a way that makes sense to them,” Krystal explains. “We want to be able to provide everyone with the information they need to make better decisions about their energy.”

The Future of Grouphug Solar

A few years ago Grouphug started as an activist gallery collective during New York Design Week. Now it’s a fully-fledged solar design company that has sold at least one unit in every state.

So what’s next for Grouphug?

Krystal says her priority in 2021 is harnessing the feedback they’ve gotten from customers so far to improve their product and customer experience. That starts in 2021 with a new version of the window solar charger–with a unique solar design built in. She also hinted at plans for “mini solar cats”, which would transform Grouphug’s solar cat design, normally reserved for larger clients like businesses, into a household option (count us in for this).

Finally, and perhaps most importantly, Krystal notes that Grouphug is going to double down on solar education. “We’re never going to be a solar installation company or a community solar company, but I’m working on figuring out how to make Grouphug a platform where people can learn about all things solar-related. We want to be able to point folks toward the right solar product for them and a trusted provider in their area.”

Like hearing cool stories like this one? Join our monthly newsletter to hear about more organizations pushing for sustainability and equity.

Infographic: How to Bring Solar to Every American.
December 4, 2020
Go to Top