Solar Star, America’s largest solar farm, provides enough clean energy to power over 250,000 homes. What does all that solar power look like?

Solar energy comes in all shapes and sizes, from single-panel-powered gadgets to rooftop solar systems to solar farms.

Then there are mega solar power plants–the kind so big you can see them from outer space.

Community-scale solar will always be our favorite, but it’s hard to deny the awe-inspiring nature of some of the biggest solar plants humans have ever built. With that, let’s take a look at the largest solar farm here in the United States.

Solar Star, America’s largest solar farm, was actually the biggest in the world when it was completed in June of 2015. It consists of 1.7 million solar panels spread out over 13 square kilometers (or 3,200 acres) in Kern and Los Angeles Counties, California. For context, that’s about the size of 142 football fields–or 4 times the size of Central Park.

All told, Solar Star produces 579 megawatts of energy, enough to power about 255,000 homes. Southern California Edison buys that energy and distributes it to customers.

The project is split into two separate installations, Solar Star 1 and Solar Star 2 (evidently, the developers weren’t feeling too creative while naming them), with the first accounting for about 314MW and the second 265MW. All in all, building the power plant created about 650 jobs over three years, and CleanTechnica reported that Solar Star would also create 40 maintenance jobs, including 15 full-time site positions, over its lifetime.

Here are a few other tidbits about the Solar Star projects, mostly courtesy of the California Energy Commission:

That’s a lot of clean energy!

Why Is Solar Star the Largest Solar Farm In America?

Hold on a minute…Hasn’t the solar industry been growing exponentially recently? Solar Star was finished in 2015. Isn’t it odd that the United States hasn’t built anything bigger in the last four years?

It’s true: although Solar Star is almost ready to celebrate its fourth birthday, it’s still the biggest solar power plant in the country in terms of power generated. Several are close–including Desert Sunlight and Topaz power plants, which are also located in California and produce 550MW each. In fact, both actually take up more space (3,800 and 4,700 acres, respectively, compared to Solar Star’s 3,200), but they don’t get quite the same kind of efficiency per area, based on their location and engineering. 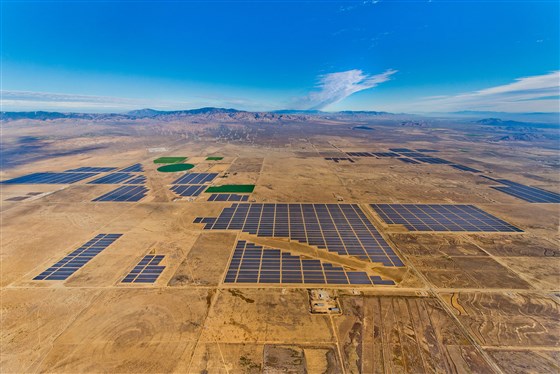 As it turns out, there’s a good reason that Solar Star hasn’t been overtaken by other American solar farms. It all has to do with a balance of two forces: renewable portfolio standards (RPS), which obligate states to meet clean energy quotas by certain dates, and cost-effectiveness.

Projects like Solar Star, Topaz, and Desert Sunlight were all built to meet an aggressive California state RPS. As such, they weren’t necessarily built in the most cost-efficient manner. Since that time the costs of smaller-scale solar have come way down, and the benefits of distributed energy generation (from more efficient transmission throughout communities to better resistance to outages), have become clearer. The result has been smaller, more numerous solar farms sprinkled throughout the communities they serve.

Interested in a small-scale project in your local community?

Fill out a simple form and we’ll tell you if there are any spots near you!

Utility-scale solar farms are most definitely still coming online today. Though Solar Star was the biggest in the world at one point, it has since been surpassed by several enormous solar power plants in other countries. Plants in Mexico, China, and India are all projected to produce in the range of 1,000-2,000MW soon. The UAE is even planning to have a 5,000MW solar farm by 2030!

Not to be left behind, the United States is still building out large-scale solar farms. This handy map from the Solar Energy Industries Association outlines all the major projects in the pipeline today. Scroll around and you’ll find lots and lots of smaller installations, as well as some big farms in the realm of 100-200MW in California, Texas, and Florida–but you won’t find any quite the size of Solar Star. The vast majority of construction doesn’t even come close.

Maybe Solar Star is destined to be the biggest solar farm America ever builds. Only time will tell!